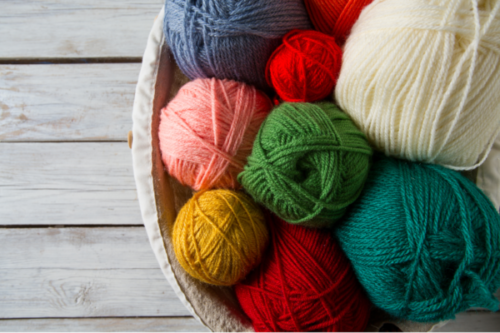 I have been thinking about this crazy idea. In fact, it’s kind of taken over my mind the last few weeks.

Like all crafters (at least the ones I’ve talked to), I have a list of projects that I want to do that is so long I can never die. I’ll be 150 years old and still working on my never shrinking list. (And just so you know, the same thing goes for the list of books I want to read!)

But, I am also typically wracked with indecision. What should I make next? Which project should engage me? And I also get bored easily so I bounce between multiple projects (and multiple books). But to further complicate things, I need some things that are super easy so that I can mindlessly work on them while watching videos for school, etc. because I need to keep my hands busy.

Anyway, back to my crazy idea. My crazy idea is to have a topic and to knit and crochet according to that topic. So far my topic list includes:

As you can see, I’ve put way too much time and thought into this so when I said it’s consumed me, I wasn’t exaggerating! I’ve already even put together a preliminary list for the Alphabet list for both knitting and crochet. My thought is to alternate back and forth between each. So one “A” project in knit and then an “A” project in crochet, back and forth.

There would be some (probably weird) requirements that make sense in my head. For most of the lists, the word would need to be in the title of the pattern, such as January Hat for January, Red Hot Socks for red, Magic Monday for Monday. For Geeky/Nerdy things, it would need to be by theme, but it wouldn’t necessarily have to be named accordingly but could be. One example of this might be the Bazinga Mitts. While they are geeky and nerdy, they aren’t as obviously geeky or nerdy named as Binary. But both would count as something geeky or nerdy. To be fair, this topic needs more thought as to categories so feel free to make suggestions on this one.

I’m picking things that I might actually use or gift to someone I know. Some things I will make from yarn I have in my stash, some I will buy specifically for a project. So, please don’t expect everything to be high-end or precious. I can guarantee that there will be a fair amount of Red Heart Super Saver and Caron One Pound used along with Knitted Wit and Malabrigo. And almost every pattern will be a free one on Ravelry. (So far, I don’t think I’ve picked a single paid pattern.)

I’ll post a link to the pattern and pictures of the yarn I intend to use about a week before to give anyone who wants to join me a chance to get the pattern and yarn for themselves.

After that, I’ll post pictures of each day’s progress and anything I struggled with, whether it was understanding the pattern, or if I miscounted stitches, etc. Some days there may be no progress if real-life intrudes so expect that, too. Work, school, husband, kids, parents, and many more things tend to draw our time and attention so please be patient with me and don’t feel that you need to wait for me if you are making the same project.

I am open to input for more list ideas as well as actual projects, so feel free to drop suggestions in the comments. And if you’re interested in joining me, please drop that in the comments below, too!

This site uses Akismet to reduce spam. Learn how your comment data is processed.